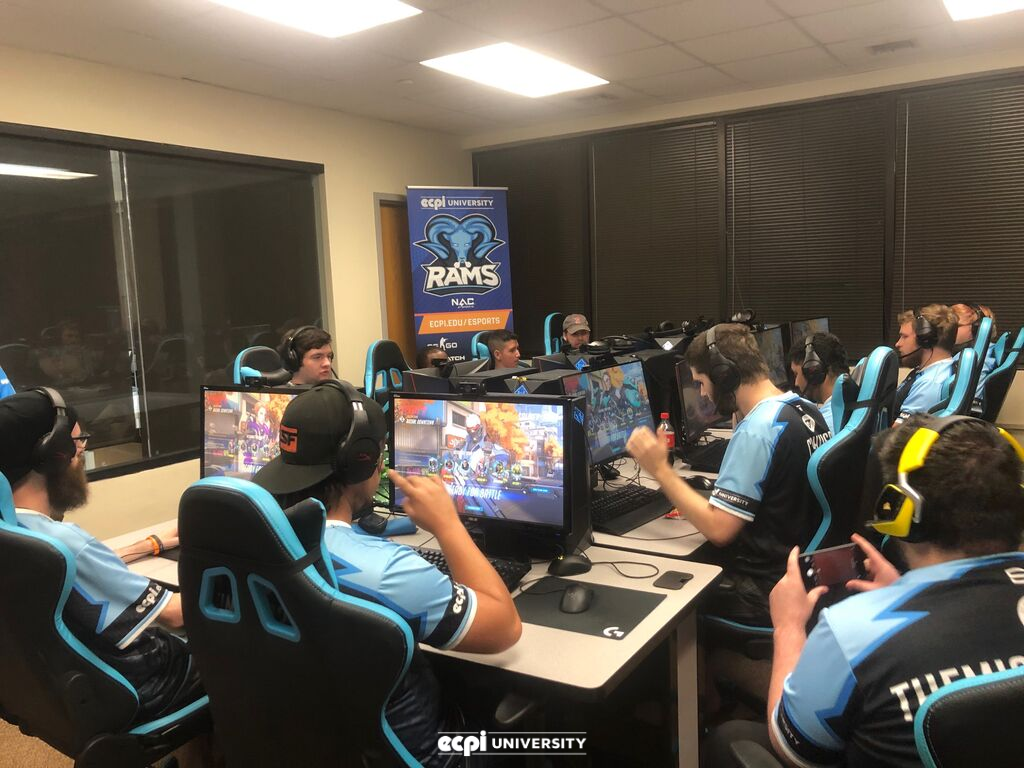 The ECPI University Rams fell to Ottawa University, 2-0, and to the University of South Carolina Sumter, 2-0, on Saturday, October 5. Both Best of 3 series were hard-fought and the Rams have positives to take away from both matches.

The first match the Rams went up against the Ottawa University Braves. First map was Lijang Tower, an assault map. The Rams went with a starting lineup of Orisa, Sigma, Mei, Reaper, Lucio and Moira, which is the current meta of double shield. The map went to the Braves thanks to quality Doomfist play.

Currently, Doomfist is one of the most broken heroes in the game, and Ottawa certainly took advantage of it. A number of the Braves' wins in team fights started with Doomfist taking out a healer early in the fight, cutting off the healing and making the fights easy for Ottawa to win.

The second map was the hybrid map King's Row. Ottawa was able to push the payload the length of the map to start the map point off. The Rams had the opportunity to match the Braves, but it was a struggle. The Braves ran Baptiste, Bastion, Orisa and Sigma, known as a bunker composition. Ottawa held the control point and did not allow the Rams to push the payload.

The second match of the day was against the University of South Carolina Sumter Fire Ants. The maps were the same as the first match against Ottawa: Lijang Tower first and then King's Row. In the first map, the points were split 2-1 with the Rams taking Garden.

The match against the Fire Ants was very close and was a matter winning a team fight here or there. First point of Lijang went to the Fire Ants. After initially running Doomfist, they went with an off-meta switch with Soldier: 76 and Symmetra. South Carolina took high ground just off the point and used it to win first point.

Garden was the second point for Lijang. The Rams stuff with the meta picks of double shield and it worked well. William "Cyphusb" Bing and Andre "AchillesWG" Vargas combined for double kill and ultimate shutdown that flipped the capture point for the Rams and eventually won the map point. The Fire Ants eventually took the map with another off-meta pick: Pharmercy. The Rams couldn't deal with her and the Fire Ants.

King's Row was tightly contested. Both teams capture the initial point and pushed the payload at least past Points A and B. The Fire Ants pushed it enough to win the map in overtime, but the Rams had solid teamwork throughout.

Pushing through Point B, CyphusB used Sigma's Gravitic Flux to catch four of the Fire Ants in the air. Alongside a Death Blossom, the Rams were able finish up the remaining Fire Ants for a team kill and push through Point B.

In what almost was the final defensive team fight, Nick "finatic2112" Hurtienne flanked on the high ground into a Death Blossom, taking out two Fire Ants. He cleaned up the stragglers and caught another two for a clean 4K. The Fire Ants were running a Sombra and in the last team fight of the match, she EMP'd a number of the Rams, rendering them unable to use their cooldowns and winning the team fight for South Carolina.

Are you a competitive gamer looking for your shot? If you want to join the ECPI University Rams, we encourage you to check out our esports homepage and learn more about the team. From there you can also sign up for a tryout to see if you have what it takes to wear the jersey!