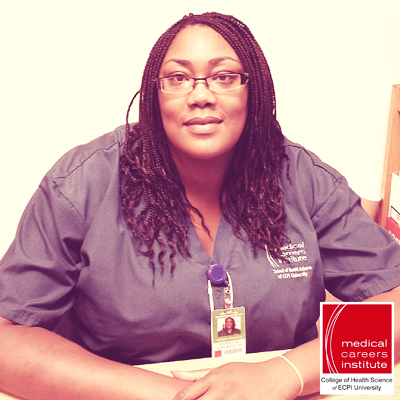 In the year and half prior to her accident, ECPI University Medical Assistant student Rosetta Spurgeon had lost all four of her grandparents, the last of which was her maternal grandmother with whom she was as close as her own mother. The grieving process for the loss of these family members sent her life into a spiral of depression. Needing something bigger than herself to focus on, she decided to enroll in college and focus her energy on “The Big Picture” as she puts it: a picture that included an education, a new career, and a new life of stability for her and her daughters.

In May of 2012, she enrolled at ECPI University’s Columbia South Carolina campus. A few months later, everything came to a screeching halt. While driving out of downtown Columbia, Rosetta rounded a blind curve only to find another motorist stopped in the lane directly in front of her. Her car hit the stopped vehicle as the car behind her struck her. After rolling twice and flipping into the opposite direction, Rosetta’s car came to a stop in the median. She awoke to emergency personnel attempting to assist her, using the Jaws of Life to cut away sections of her car. She remembers them cutting off her new Air Jordan shoes, but few other memories of the accident remain. She awoke again in the ICU with extensive injuries, including numerous lacerations, six broken ribs, a broken left hip, femur, and knee.

Even as she listened to the doctors describe her injuries – what she would have to do to walk again, the number of surgeries she would need to endure, the possibility of having to amputate her leg, the months of medication and physical therapy that would follow – allowing herself to become physically or emotionally crippled for life was simply not an option she was going to accept. Her daughters, her parents, and her faith in God were the glue that held her together.

Although she still lives with the scars and continuing pain, she continues to have her sights set on “The Big Picture.” After 10 days in the ICU, followed by 20 days in the hospital and countless surgeries and physical therapy sessions, Rosetta was finally able to walk again. In August of 2013, she returned to ECPI University to continue her program. She is currently a campus student worker and has proven to be an invaluable asset to both the campus library and her fellow students. Rosetta has truly come back from the brink of disaster by focusing on her academic and personal success.