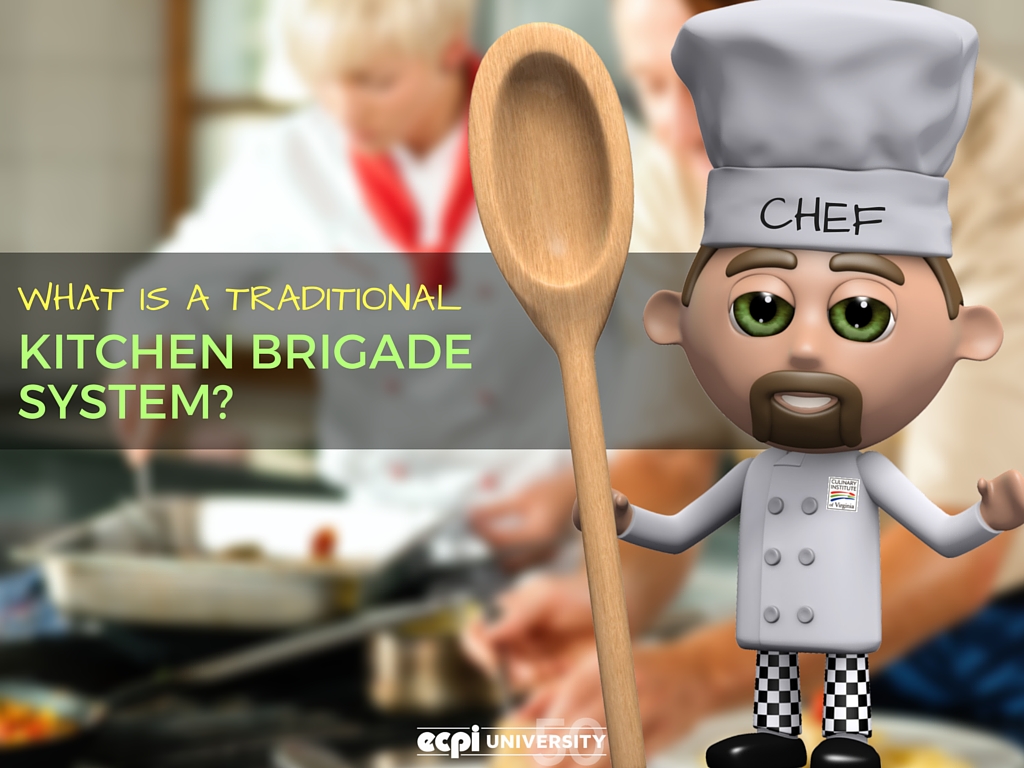 What is a Traditional Kitchen Brigade System?

The kitchen brigade system is the hierarchical structure that kitchens have used for centuries to keep things running smoothly. Much like an army, it has a leader at the top rank, and an assortment of ranks beneath that in descending order of "command".

Kitchen brigades aren't reminiscent of the military by coincidence. They originated in medieval Europe, as soldiers selected to cook for their armies followed nobles into their castles during peacetime to cook in their kitchens. Militaristic principles of rank, discipline, training, and cleanliness made their way into kitchens.

In the 19th century, French chef Georges-Auguste Escoffier developed the kitchen brigade system that is still used around the world to this day. The system, which features a head chef in command, a sous chef as second, and an assortment of specialized chefs and assistants, helped bring order to the chaos of the kitchen.

The chef de cuisine is the general of the kitchen. They oversee every aspect of the kitchen, including planning the menu, maintaining inventory, tasting and modifying recipes, setting costs, and training and managing the entire staff. The chef de cuisine has to be much more than a good cook; he or she has to be a leader, with attention to detail and an ability to manage a large number of people in a stressful work environment.

A chef de partie, or station chef, is in charge of a specific aspect of production, such as sauces, fish, or bread. In a small restaurant, a chef de partie might handle their station alone. In a large restaurant, they might command chefs de commis, or junior chefs. Different types of chefs de partie (and their responsibilities) include the saucier (sauces), grillardin (grilling), rotissier (roasts), poissionier (fish), patissier (pastries and desserts), and boulanger (bread).

The chef de tournant, or relief cook, is a sort of jack-of-all-trades. Their job is not to specialize in any one area, but to move around the kitchen assisting all of the other chefs when they’re in need.

Working in a brigade

Kitchen brigades exist for a reason. Restaurant kitchens can be chaotic, noisy, and stressful. A structured chain of command helps keep everything running smoothly when the tension is high. The kitchen brigade also clearly delineates every individual's role, allowing everyone in the kitchen to focus on simpler, clearer tasks.

The stress of a kitchen can lead to raised tempers and frayed nerves. Teamwork is an essential part of a successful kitchen brigade, and every member can work to cultivate a strong culinary unit. For the chef de cuisine and sous chef, maintaining morale in the kitchen is essential. It can be easy to take out one's frustrations on lower-ranking cooks, which only serves to add to everyone's stress. As for station chefs and chefs de comis, it can help to learn that the tone and rhetoric of a kitchen is not personal. Much like the army, running a smooth brigade can often require quick, sharp commands. It's all part of the process of learning to work in a restaurant.

Do you think you can handle the pace and heat of the kitchen? If you’re considering a career in the culinary arts, earning your Associate of Applied Science in Culinary Arts at ECPI University could be your start in this exciting field. Contact an admissions counselor today to learn more about the Culinary Institute of Virginia. It could be the Best Decision You Ever Make!